Swooshing down the slopes is simply wonderful! However, more and more winter sports enthusiasts are drawn to the idea of walking uphill first.

On Flumserberg, ski and snowboard tourers can use the prepared and signalized Spiga slope no. 1 – Thursday to Saturday even at night. Ski tourers are advised to park their car in zone 8 (Tannenheim Strasse).

Ski touring on the slope during the day

Ski touring during the day is only allowed on the Spiga slope no. 1 between Tannenheim, Spiga and Prodkamm. All other slopes are closed for ski tourers during the day and night. The ascents must be made one after the other on the edge of the piste.

Ski touring on the piste at night

In principle, all pistes on the Flumserberg are closed from 17.00 to 08.00. Winches are used for the preparation. There is danger to life!

The piste no. 1 from Tannenheim via Spiga to Prodkamm is open on Thursdays, Fridays and Saturdays until 21.00 and can be used by ski tourers. Also the mountain restaurant Prodkamm is officially open on these evenings until 21.00. At 21.00 the last guests will be asked to leave via piste no. 1. All other pistes are closed from 17.00 for preparation and may not be accessed or skied. Outside these special times, piste no. 1 is also closed for ski tourers in the evening. 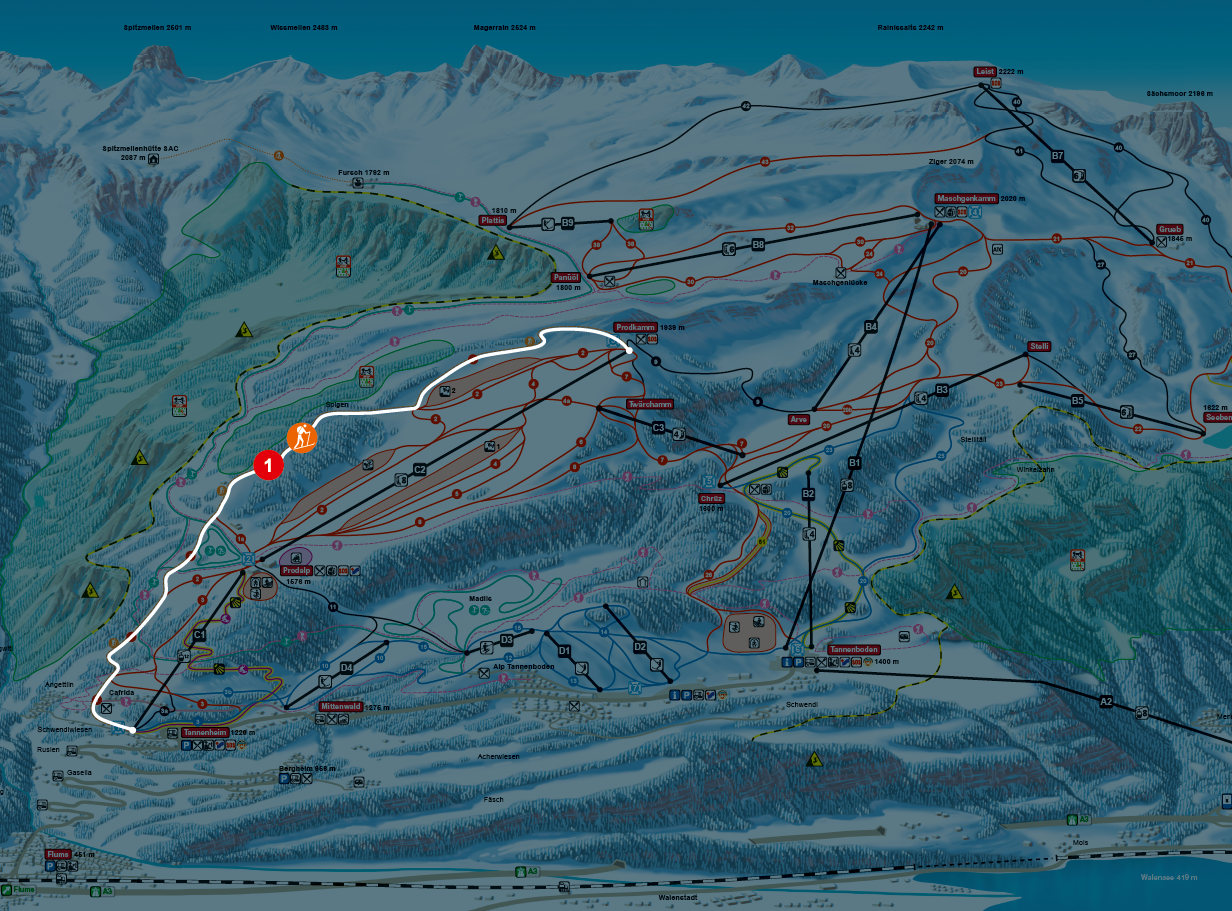 For guided ski and snowboard tours, you should contact the Swiss Ski and Snowboard School Flumserberg. From "leisurely" to "demanding", it offers a variety of different options. And the local guides will make sure that your tour is not only fun but also safe.

Tip: Besides ski and snowboard tours, the Swiss Ski and Snowboard School Flumserberg also offers freeriding lessons, avalanche training courses and special touring weeks for experts. In addition, the transceiver training area on Flumserberg can be used daily and for free.

Dangers when ski touring on the slopes

Stay up to date on activities, special offers and the latest news on Flumserberg. You can unsubscribe at any time.